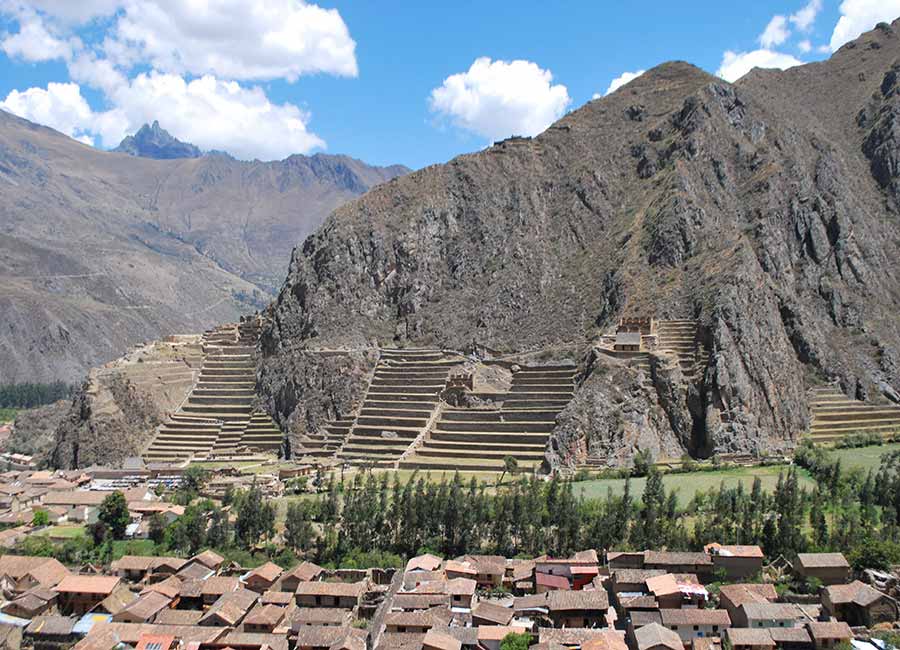 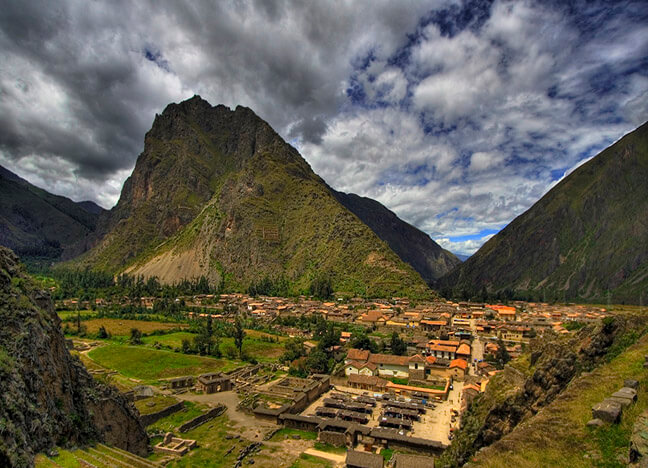 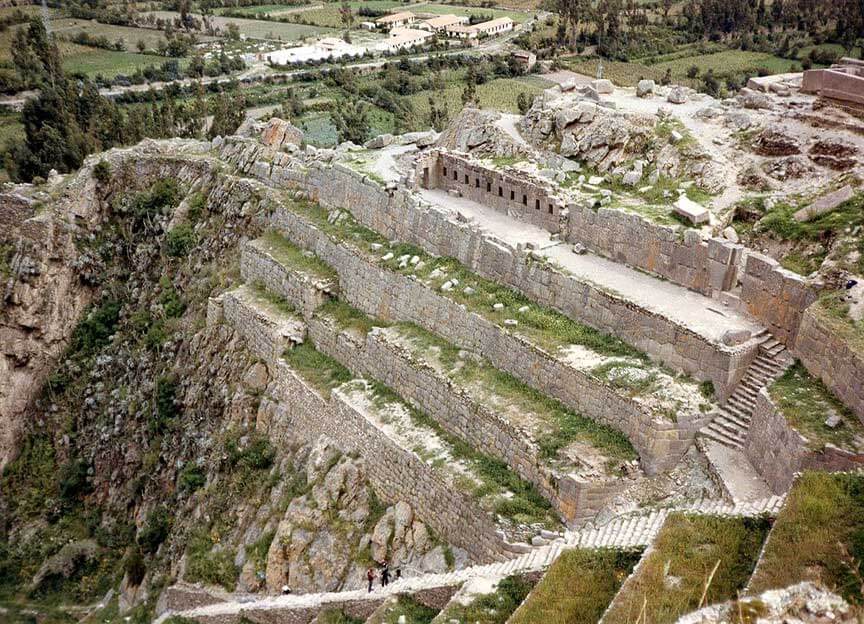 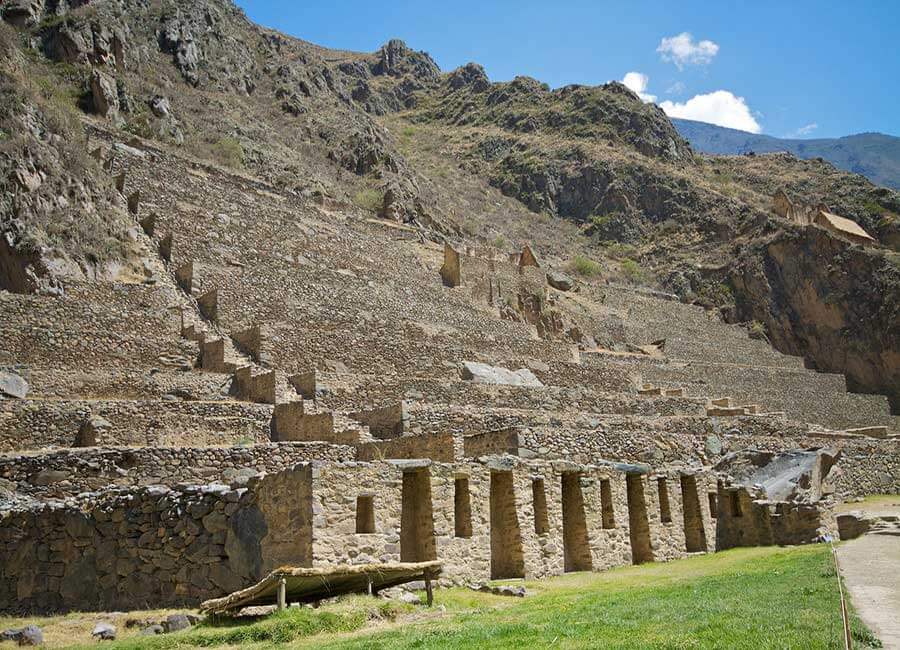 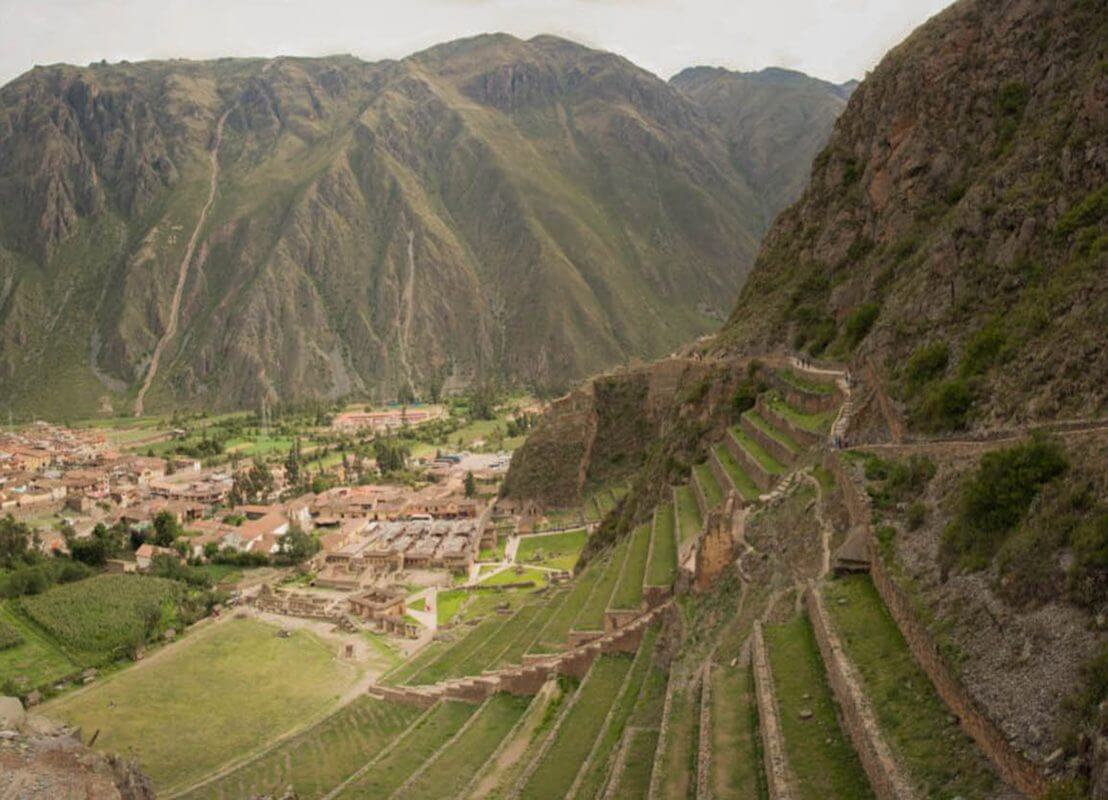 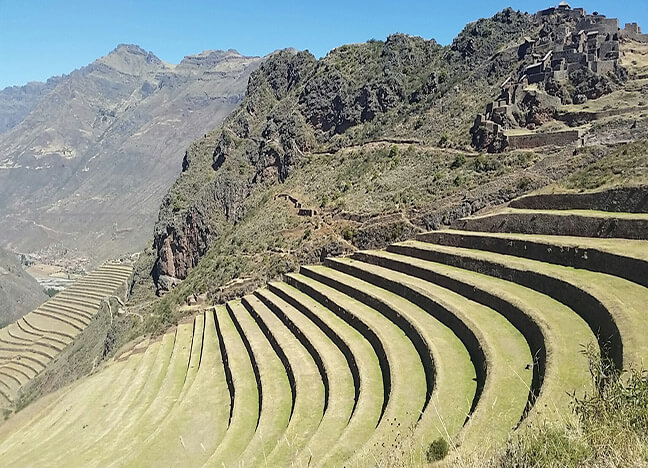 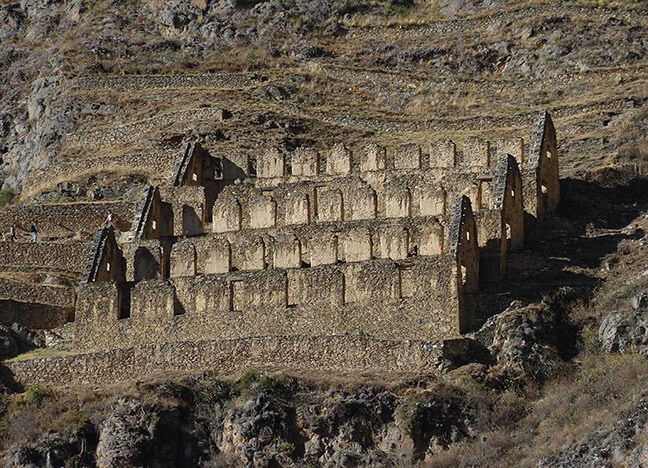 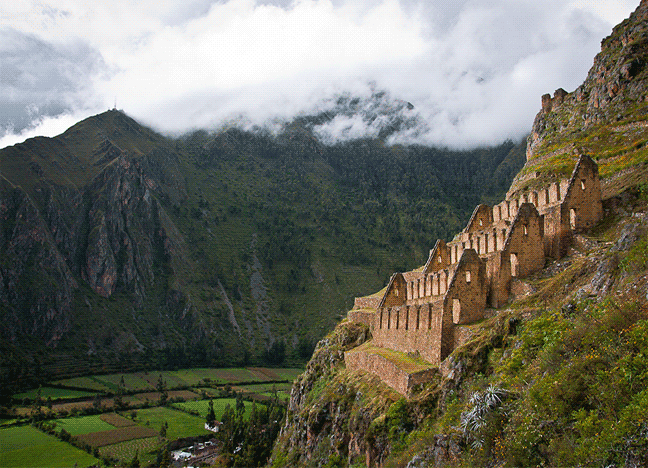 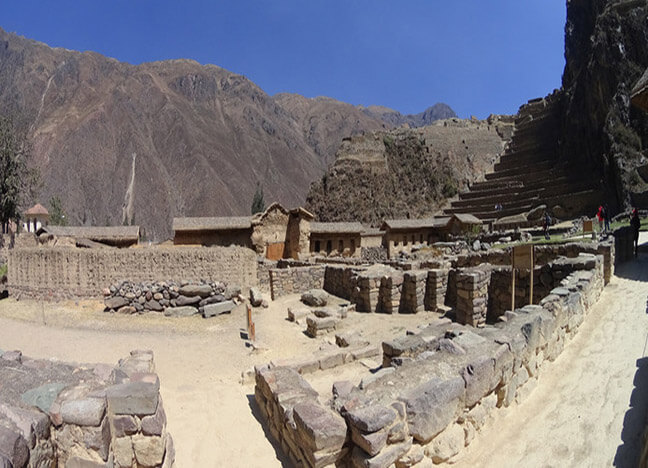 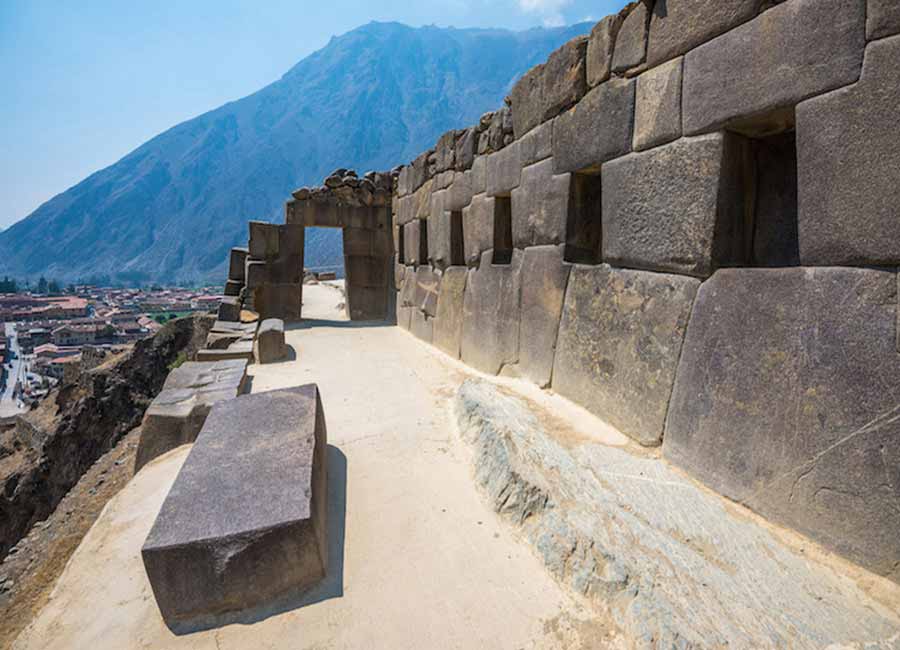 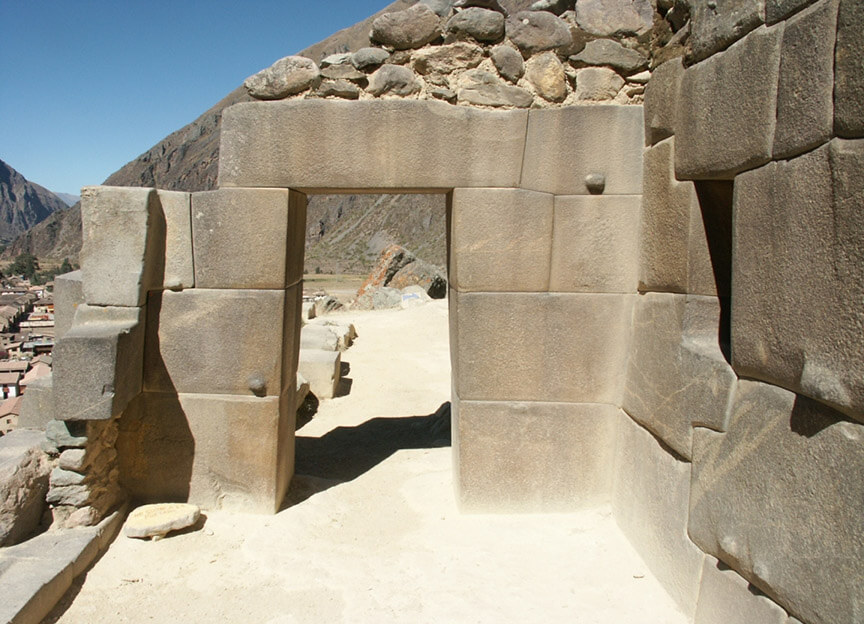 One of the most impressive architectural complex of the Inca Empire was an important administrative center with probable military functions, as shown by its walls and towers.Also, there are traces of ancient roads and aqueducts, which together with the architectural work, making it one of the most amazing work done by the Incas.

It is now an inn or shelter, located in a strategic place in the Sacred Valley of the Incas,whose residents maintain customs and traditions of the ancient civilization.

The Sinkuy, is a bowling game which is held on the afternoon of January 1, which is organized by the Varayoc (mayor) and council of the Communities Huilloc, Patacancha Kellkanka and Yanamayo, who take possession of their new positions .From early afternoon the villagers gather in the town square, wearing their party dresses, young people with their hats adorned with red ribbons and flowers, bringing their meats and jars of chicha which are also adorned with flowers and animal-shaped loaves (ch’askhuacos).

Place 6 small wooden sticks covered with red flowers, which are shot down by two wooden balls for a couple of pitchers made first by the Mayor of Ollantaytambo and the wife of one of the Varayoc and so successively are thrown by mixed couples bowling. On each occasion, after throwing the bowling, the male participants pay a voluntary amount of money, which serves for varayocs alimentaos and drinks can invite their countrymen when they return to their communities.

This game used to introduce new varayocs and community council to the people of Ollantaytambo and during its development, you can hear the sound intermittently pututus serious of which give a special atmosphere to the event.

The feast of the Bajada de Reyes held between 5 and 8 January, is now one of the best festivals in the Sacred Vale. It is a folkloric celebration where people involved in the communities of Ollantaytambo and the common people. The people of Huilloq communities and bring their child Patacancha Marcacocha-called Melchor together with the Varayocs and dancers from Huallata, and are received in the main square by two other children, kicking off the party.

Within the Basin there Patachancha a party that brings together all communities, is the feast of Compadres, celebrated in February. It’s a party where people congregate in the town of Marcacocha.

This festival is my sexy and visitors can interact with the villagers and observe demonstrations presented each community such as the mastay of their meals, weddings and all your ceremony.

This event is the meeting between the two sides of town made up of groups in which women are dressed in clothes of mixed race and the men with their red ponchos.They begin to dance in every place of origin and Qosqo Araccama Ayllu and head to each other, being on the bridge Calicanto, where some officials appointed by them acts of judges. In mid-afternoon, and spectators bet on Ventiderio, rope milestones begin with the participation of men and women. Three attempts were made to pull trying to overthrow the contrary, amid music and cool water balloons to participants.The group that manages the other signal crosses marked on the floor and some participants often fall through the floor.

Calicanto Bridge, has a rich history, it is the place where they meet the requirements of Qosqo Ayllu and Araccama, the places where people lived and where the Incas revered gods. This bridge in colonial times was built of lime and pebbles, hence its name.

After drinking several glasses of chicha and the fun of being involved in the chutanacuy, participants will dance in the streets of the town and huaynos ccashuas the sound of a band, inviting people to join to go to the famous yunza where artisans without distinction are invited to ax in hand to cut the tree full of gifts.

It’s a marathon mountain bike downhill terrain, involving more than 300 runners who start all at once kind stampede.

The race starts in the open from Malaga to 4.650 m by a wide road that leads to a very open Inca Trail is still used by shepherds in the area, passing alongside a small village with a few stone houses and then the road gets rougher, finally entering a zone of single tracks in the middle of trees beside a small river, crossing some unpaved roads. The arrival is in the town of Tankage to 2.800 meters.

Feast of Ollantaytambo, where more than 400 dancers, and all the people came in processions and celebrations. Four days on which the party do not stop and there is always a parade that is dancing in the main square, place where the Señor de Choquekillka sailing.

This is one of the main celebrations in Ollantaytambo, where visitors can participate without any discrimination, taste the fruit of crops and people’s work.

Every June 21 is the scenario Simapuquio viewpoint to appreciate the changing seasons, with a special feature as did the Incas; very early and foreigners own target this area to assess the income of the first sun rays in the large pyramid door Pakaritampu, space built agricultural terraces.

According to the story, this time the Incas developed a special ritual of thanksgiving to the Sun God, for the good old days and wishing good fruits of their crops.

Qhaswas today (dance) and expected payments sunrise, others with little clothing on the body to receive the force of energy from sunlight, resulting in strengthening their health and more excitement in their daily work.

For a week starting June 21 starts the festivities of the Sun, known worldwide as “Inti Raymi in Cusco, staging Q’oriqancha starting at the Plaza de Armas and culminating in the Sacsayhuaman.

Coincidentally, one week before the solstice unfolds the drama is staged in the main local Ollantay Park Ollantaytambo. Many agencies and tour operators expanded their Simapuquio circuit until Cachiccata quarries, known as a living museum, coming after the high peak of Intipunku (Sun Gate).

It makes the staging of Ollantay Inca drama that was written in the eighteenth century.The story chronicles the forbidden love between a general Ollanta and Coyllor Cusi, the daughter of Pachacutec. Ollanta was one of the generals of the empire, who had to leave town disappointed because they can not love a girl who belonged to social class. Back in the village of Tampu, Ollanta incited people to revolt against the imperial army, causing a war that lasted several years. Finally, is captured by the treachery of Captain Rumiñahui and taken to Cusco to Tupac Yupanqui, who, after hearing the story, decided to release it and accept it as a companion to his sister.This drama is represented by actors on the esplanade ollantinos Archaeological Complex.

From the year 2007 starts to reassess the cultural identity present in the gateway to the beautiful Andean participants high Andes, with costumes and outfit worn daily.

You can differentiate the costumes worn by the geographic location in the basin of Patacancha their clothes predominate color Indian red, black and based on its own tissue. In the Valley Floor Vilcanota Basin suit is mestizo, white straw hats, skirts yield a blanket thin cross colors.

This value is set and now admired throughout the world through the web and as a product brand flag “typical wrist.”

It is the anniversary of political creation as a district of Ollantaytambo, in this celebration involving all communities in the district, which is present in the population with their costumes and dances.

The Misk’a Raymi or Feast of the first crop of corn was developed in the month of December in the community of Spring Valley floor Ollantaytambo. The organizers invite the neighbors to participate in its many recreational and competitive activities where the public are encouraged to be part of this activity.

This event came in 2007 and so strong in this community with traditional contests like the bass of pumpkins, corn eaters of porridges, drinking chicha, racing rims, among other powers that animate the party.

Women to the sound of Andean music based expend their meats or served with the delicious sweet corn, roasted guinea pig, roasted chicken, corn and cheese, corn Lawa (Cream), river trout with corn, among other houses.

In the high Andean communities develop their craftsmanship Ollantaytambo inherited from their parents, which drive the Andean textiles with natural dyeing.

They organized manner shorn wool from their camels, washing your raw material in the river, then they are fine yarn (puskay) and stained with grass and stems of native plants.

These are then dyed by hand and machine craft material, ending in one or two months a blanket or breezeway.